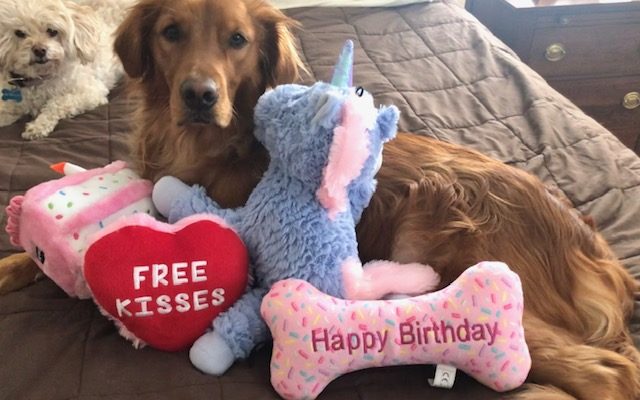 It all started with a text from my sister-in-law at 9am this morning informing me that while Daniel the Golden Retriever had been a fan favorite at the Westminster Dog Show, he didn’t win Best in Show. He lost to a Poodle named Siba. We joked back about forth about the injustice of it all (as we are a family of Golden Retriever owners/fanatics). She suggested we “take to the streets” as I proclaimed that he was robbed and such a transgression could not be tolerated!

Then I had an idea to create a Change.org petition as a show of solidarity for Daniel…just a light-hearted attempt at rallying some support for the dog I was hoping would be named Best in Show. I made the petition and then posted it in a Golden Retriever Fan Club Facebook Group, you know, to get some signatures on that petition! I mean, this was a whole group of people who love goldens. Surely they would side with me, right? Well, not really…

Initially it didn’t occur to me that anyone would be upset by it and, as I’ve said, it was certainly never meant to be taken seriously. Honestly. It was all in jest. And the majority of people understood it was a joke, I think.

But the ones who thought it was a legit attempt to have the outcome of the dog show overturned came out of the woodwork too. And I was not prepared for those people. Now listen, I know I should have just scrolled past the guy who wrote:

Love my Golden, but this petition is appalling and is 100% indicative of the “not my X” generation. Whether it’s “not my president” or “Not my ending to game of thrones”, someone wants to cry about the results and get them changed. There was a competition and someone lost. Not everyone gets trophies in life. Move on. And you saying this is now a joke, is a pathetic cop out. Because at the moment you’ve already wasted at least 50 people’s time signing a meaningless petition.

But I didn’t. I responded “Ok, boomer” like the classy and mature person that I am. Also correction, sir. My petition now has over 145 signatures. LOL.

And then there was this one:

This is an absolute joke. As a judge and a competior in AKC dog shows, shame on you. The standard poodle was simply beautiful as well as Bourbon the whippet. All 7 of those dogs in Best In Show last night was worthy of Best in Show. Celebrate the fact that he won the Sporting group and leave it at that.

The one thing she was correct about was that it *was* an absolute joke and yes, all 7 of the dogs were worthy of Best in Show. But shame on me? I mean, really?

There were more, too:

Poor joke…in today’s bazzaro world even well intentioned “jokes” are mistaken for the real thing. And to me, this looked real. JMHO.

Not everyone gets my humor. Fair enough. And I guess the takeaway is that some of the haters really need spelling and grammar lessons, but also that I knew better than to engage in the negativity of it and I did anyway. I just couldn’t stop myself from feeling that need to defend/reply/jab back – which was nothing but a waste of my time.

I will never stop in my pursuit of #JUSTICEFORDANIEL – the very goodest boy – who should have been Best in Show. JMHO.

SIDE NOTE: The Golden Retriever pictured is Oakley. She will be 3 in March and also thinks Daniel should have won.

ONE MORE THING: This is Daniel and would you just listen to that crowd go wild for him: