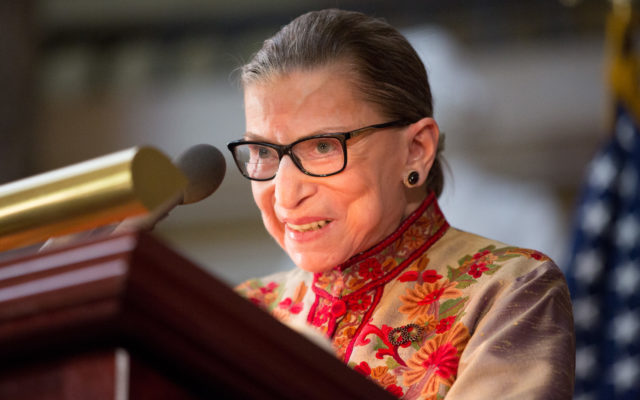 Supreme Court Justice Ruth Bader Ginsburg has died after a battle with pancreatic cancer, sources report. She was 87 years old.

Although details of her death have not yet been revealed, Ginsburg has suffered a number of health issues in recent months. In July, she was admitted to the hospital on two separate occasions to undergo a procedure on a bile duct. The hospital stays came after she revealed she was battling cancer for the fourth time.

Born Joan Ruth Bader in 1933, the Liberal justice was nominated to the U.S. Court of Appeals by President Jimmy Carter in 1980. She became the third female justice on the Supreme Court in 1993 after she was nominated by President Bill Clinton. Discussing her health issues recently, Ginsburg vowed to continuing working until she “can’t anymore.”

Reacting to the news of Supreme Court Justice Ruth Bader Ginsburg’s death, a number of politicians and celebrities have taken to the Internet to pay homage to the “champion of justice.”

Justice’s Ruth Bader Ginsburg’s passing is a immense loss. Her tenacity & strength were matched by her intellect & compassion, & her spirit will live on in all she has inspired. My prayers are with her family & all who loved her. #RIPRBG

Among those remembering Ginsburg is Senator Bernie Sanders, who calls her “an extraordinary champion of justice and equal rights.” Former President George W. Bush says Ginsburg “dedicated many of her 87 remarkable years to the pursuit of justice and equality, and she inspired more than one generation of women and girls.” A tweet by “Scandal” star Kerry Washington reads, “Her rest is earned. It is our turn to fight.”

Also paying tribute to Ginsburg is Illinois Governor J.B. Pritzker, who writes, “America has lost an icon and inspiration,” while Connecticut Governor Ned Lamont calls her death “an unimaginable loss.” And finally, Chief Justice John Roberts writes, “Our Nation has lost a jurist of historic stature,” adding that Ginsburg will be remembered as “a tireless and resolute champion of justice.”

What changes did Ginsburg champion during her time on the Supreme Court? Will she be remembered 100 years from now?